Since I've been back home for the past 10 days I have been SO busy working with all the kits that were waiting for me!!!  One of them was this beautiful Crop Addict September kit featuring Bo Bunny Mamm Razzi and some Dream Street papers as well!

So here is what I came up with!

Included in the kit are these little chipboard "playing" cards.  The ones I got were for a girl and had a bit of pink in them, but since there wasn't pink in the papers, I had to improvise.  I used some pink ink on some of the stickers in the kit. 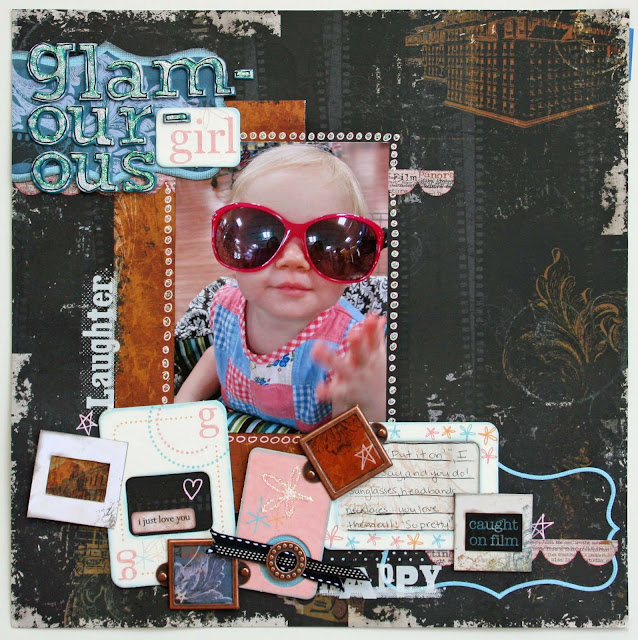 For the little frames, I cut a piece of paper to fit inside and filled it with Glossy Accents. 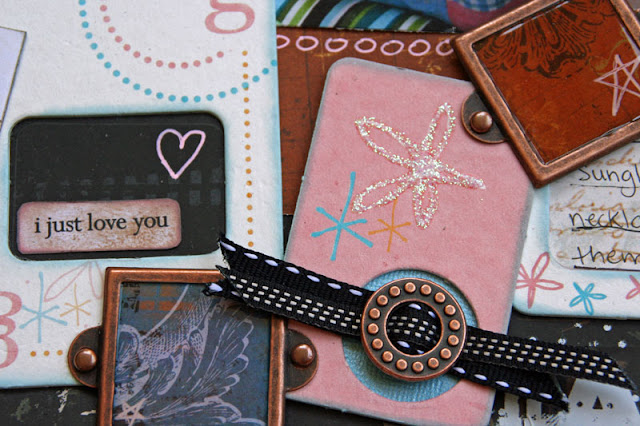 For the title, I sanded the letters and inked them a bit with pink, too.  Then I outlined them with black pen and added some Stickles!  I also did some doodle cirlces around the photo for a frame and filled them with Stickles, too.  I imagined these little circles as being bursts of light around my "glamour" girl!  :) 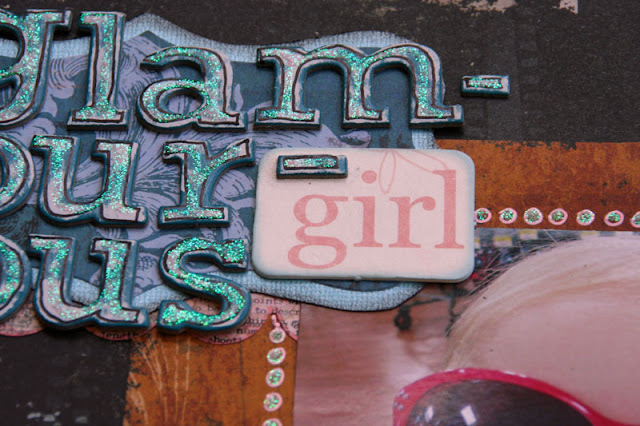 Next I worked with these Dream Street papers and the chipboard accents.  I wanted to use all the little blue flowers that come in the kit, too! 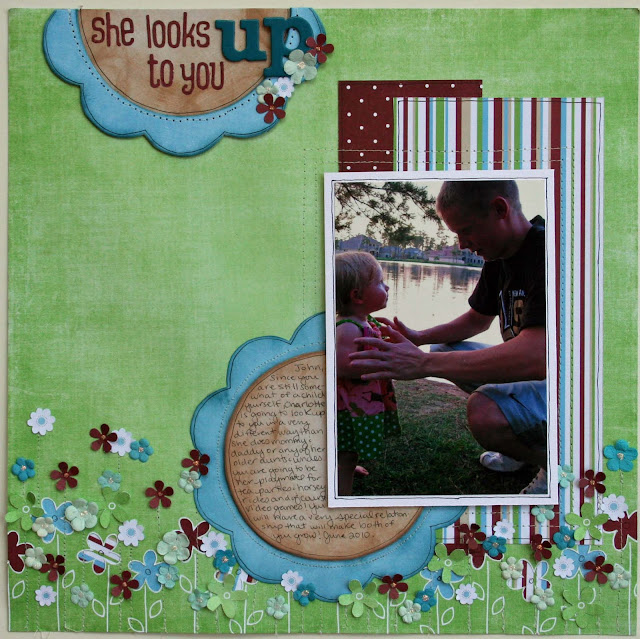 I cut out the flowers in the green paper and put some of the other patterns in the negative space.  Then I used the green ones as embellies. 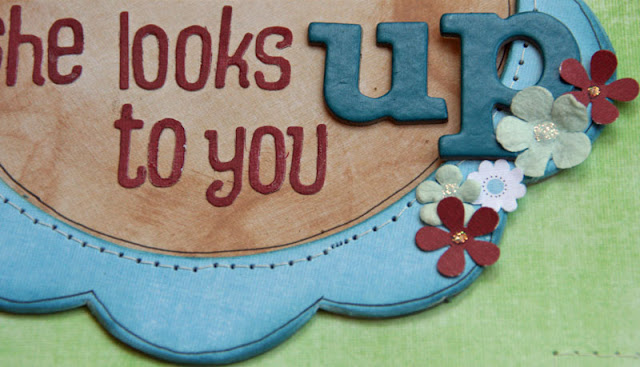 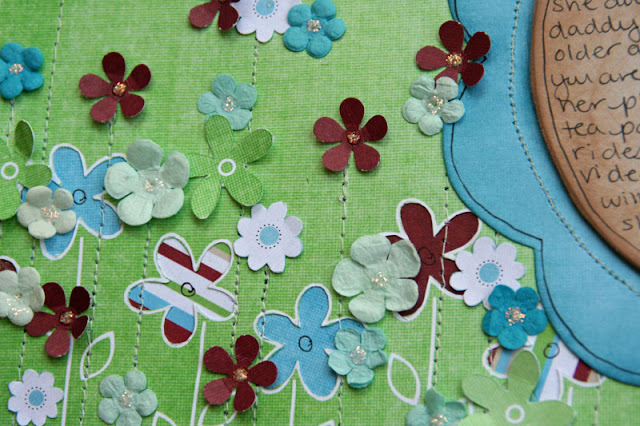 The red and blues in this kit were perfect for the page I have been meaning to do about July 4th!  I was inspired by Tessa Buys to use some fabric around chipboard pieces (which I cut myself with my cricut) and then sewed fabric around each piece. 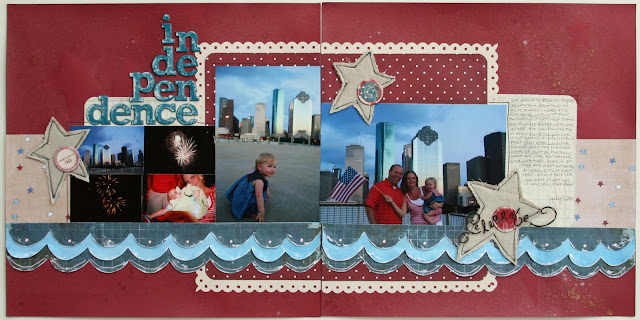 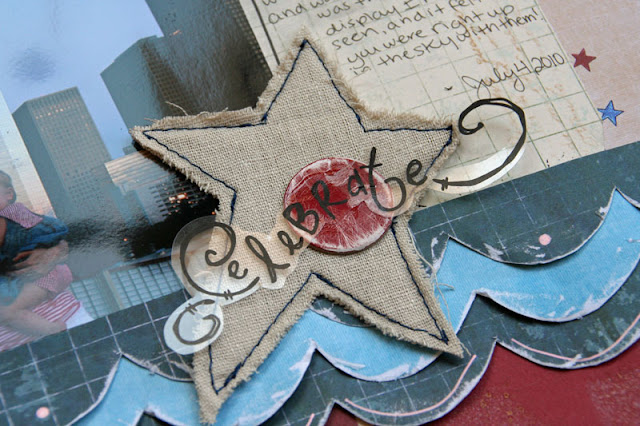 I also lightly misted the CS and used some star shapes in the background for masking. 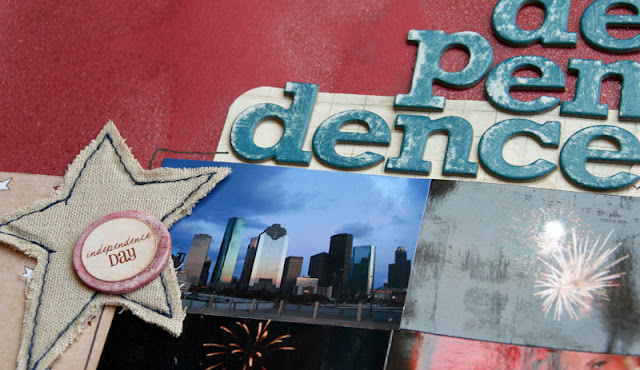 So we went to the Eagles concert and if you know the cover of the Hotel California album, you will know where the inspiration for this page design came from!     The shape of the concert stage also led me to using the large circle on my page, too. 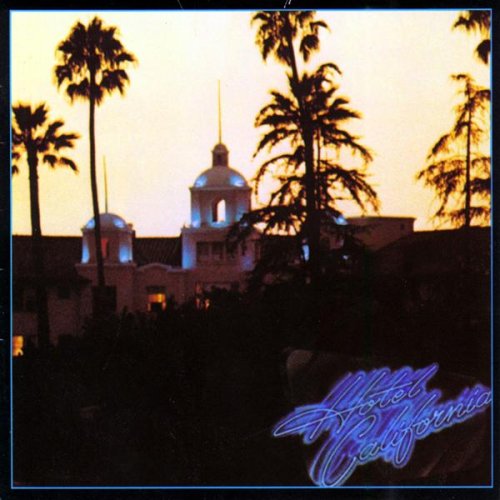 (image from http://www.album-cover-art.org/b0011z508a/eagles/life_in_the_fast_lane )
Also, I know it was technically Joe Walsh who sings "Life's Been Good", but they still sang it at the concert, so I had to use it as my title! 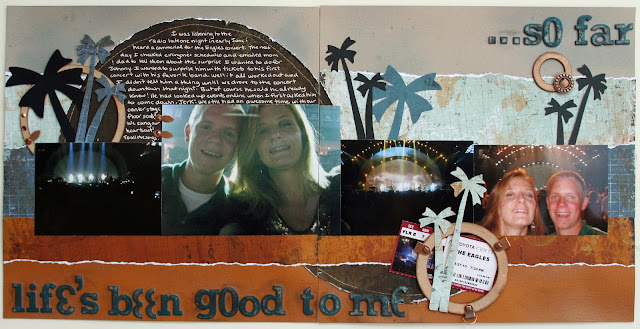 I had some photos that I wanted to use on a 2 page spread, but I only had two pieces of CS left, and they were two different colors!  What's a girl to do?  SOOOOO I cut eac into half, and used one color on the top of both pages and the other color on the bottom.  On the back of my page I taped them together to make them 12x12 and I also reinforced with a strip of patterned paper on the front! 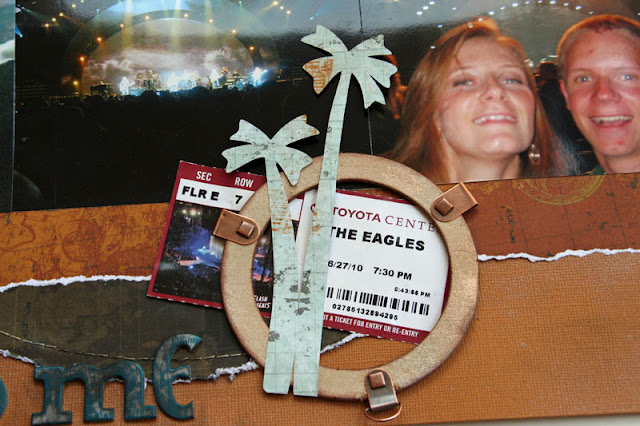 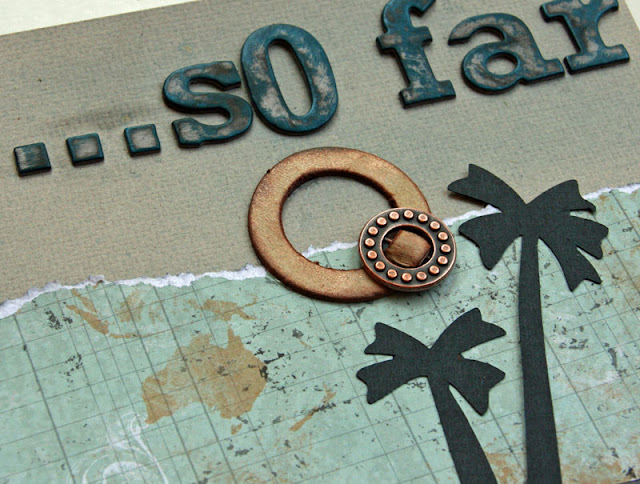 I actually usedmy Cricut (*gasp*) for a change and cut out these palm trees using the Stretch Your Imagination cartridge. 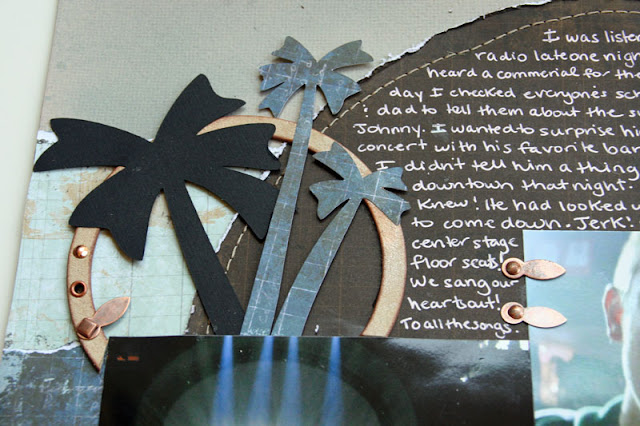 Well I have absolutely nothing left of this kit!  It was fun and I love the diversity of these pages!

The next kit I am working with is for a Guest Design spot at Citrus Tree Studios.
Posted by Audrey Yeager at 2:34 PM

These are just so full of inspiration I just love how you combined all the different elements to make such an awesome array of layouts!!!!!!

WOW, you made A LOT of FUN pages with this kit. Love the sewing on the flowers and stars, and how you displayed your concert ticket. REally like how they are all so unique--GREAT job!

Wow - such creative layouts I love how you used the flowers on your one layout. I will definitely be giving that a try.

Wow, great pages!! Love the flowers on that one, love how cool all the extras are on that first page. Love the pics and the ticket on the last page. OK... I love it all!! :)

Love the flower cut-outs and the fabric covered chipboard and the stickled "lights" and...I could go on and on. So glad you're back in Texas!