Well, we made it through, but we are not completely out of the woods yet!

The storm was like nothing I have ever experienced before! I was very prepared, though, for the worst to happen! Since this was my first hurricane, I wanted to make sure that we were prepared for the storm and for possible tornadoes afterwards. I put together a box of food, a can opened, flashlights, blankets, and axe and crowbar, and lots of containers of water and had them ready to go under the stairs in our big closet. We also filled all the tubs, and had things ready for the pets, too. 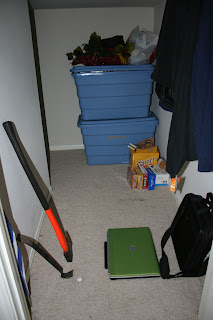 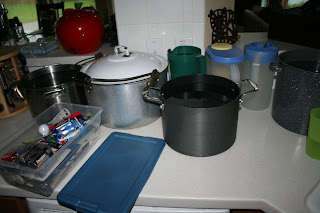 The wind started whirling at around noon on Friday. It really started to pick up at around 7 pm. I took some video about every three hours, and I am going to try to put it together in a little clip. The storm was at it's peak between 12 and 4 am, so I didn't get video then. I went to bed around midnight and the power went out around 3, i think. The wind was like nothing you've ever heard. The house alarm started to go off at around 5 am becuase of low battery. It was eerily quiet and we realized that the eye was passing over us. Keith's friend Dan called us at 5:15 (6:15 NY time) to see how we were doing. It was the last cell phone connection we could make for at least 24 hours because the lines were busy or down. It was still raining pretty hard when we woke up. The yard was pretty much flooded, and we had a surprise in our backyard!!!! 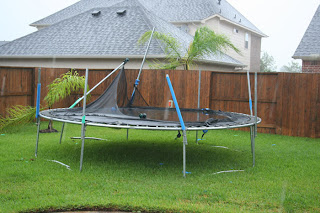 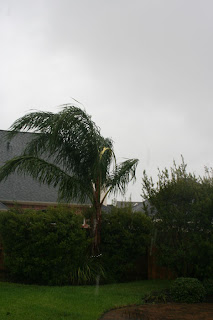 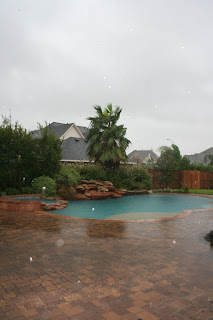 Things finally started to calm down around 3 pm on Sat., so we went out for a drive in the neighboorhood to see how bad it was. There were trees down everywhere and so much debris. But the other odd thing is that there were SOOO many people out and about, riding bikes, walking their dogs, and just driving around! I have a video that I am making off all the damage that we saw.

So we went without power for FOUR days and it seemed like an eternity!!! All of the food in our fridge and freezer we had to eat or cook! This included our wedding cake topper that we were saving for our anniversary on Oct. 13. It had made the trip down from NY to TX, but couldn't survive IKE. We ate it at our neighbors house and shared it with some friends. My neighbor took some pics of use eating the cake, so you can expect a LO on that sometime in the future.

It was nice to get to bond with the neighbors and some other friends who came over, but I was anxious for the power to come on. Deb and Mike lent us their generator on Monday after their power came on. We used to it watch TV, but we didn't have cable, so it wasn't great. But at least we had the fridge!

It is Thursday, now, and we still haven't been able to go to the grocery store and get some real food...many of them are closed still, and so are many of the gas stations. I have heard that some areas around me are not supposed to get their power back until after this coming Monday! This had been a long process for many in this area, and I can't even imagine how those people who lost everything are feeling!

Well, that is it for IKE! I will post some scrappy stuff, soon!
Posted by Audrey Yeager at 11:23 PM