Some embossing, a horticulturalist, LOTS of spaghetti, and a lighthouse....

Is that the strangest blog post title or what????

Speaking of titles, I think I have the longest word EVER for a title on a LO.  You see, Charlotte loves The Wiggles.  And there is a song about picking flowers, and in the background the guys are singing "he's a horticulturalist....he's a regular botanist....".  Whenever we see flowers, I sing that song, we smell them, and she goes..."Mmmmmm".

She also has a facination with dirt...and mulch...I have even had to scoop some from her mouth before.  So this summer, she wanted to play in grandma's garden and since I was right there, I let her, and she had so much fun!

I distressed the heck out of some cream colored CS, misted it with some black and brown Chalkboard mists, then inked the edges. 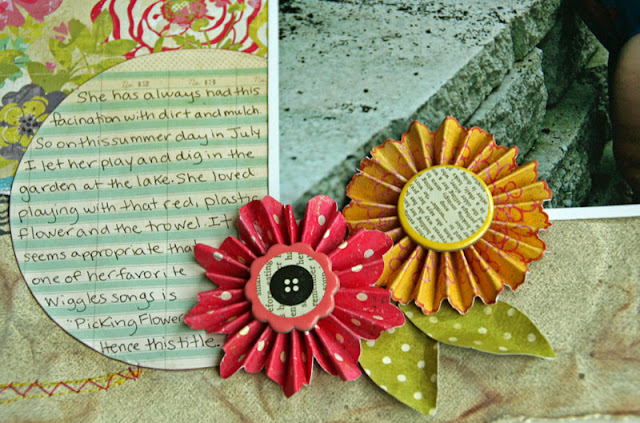 The pleated fan flowers I made out of the lovely piece of paper in the kit that has all the colorful borders on it.  Yes, I fussy cut them all out....
I used the same beautiful kit to make this LO using some of the Sassafras Mix N Mend papers along with the Crate Paper Restoration. 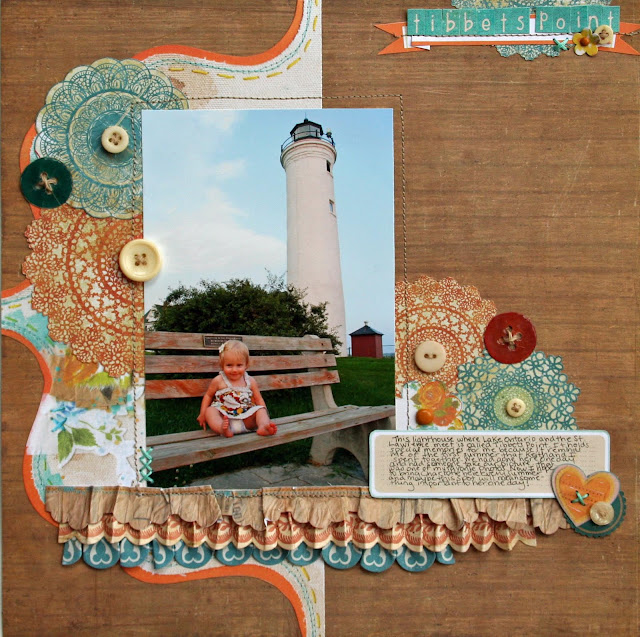 I used some of the sticker border sheets and pleated them and squished them on the page.  I also did a little bit of stitching here and there.  The title spot, the journal spot, and the two darker buttons are all from the Digital Download that comes with your kit purchase!!  how awesome is that???? 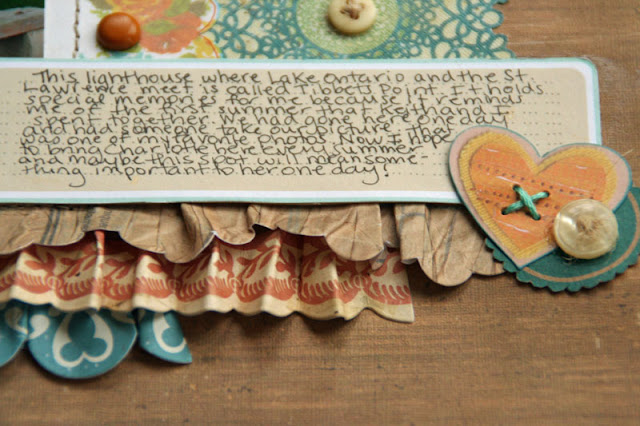 OK, as you know I am guest designing at Citrus Tree Studios this month.  On the 10th of each month the challenges are posted. Mine is pretty simple....use a photo corner.  But you have to make it AND it has to be a focal point on your page!!  Easy Peasy, right????  Come on over and play with the challenges! 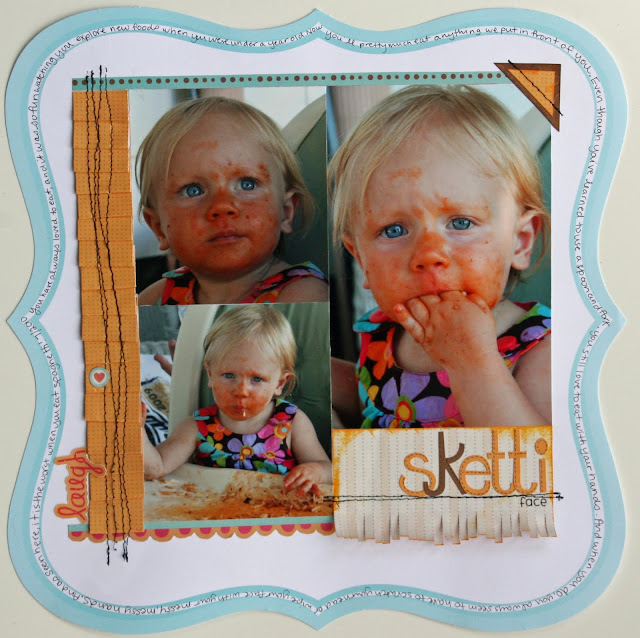 I used this months CTS kit "Paisley Heights" for this LO.  Charlotte loves sketti.  Yes, this was a disaster to clean.  I know she looks like an Oompa Loompa...but she was enjoying it so much...
I tried to mimic the colors of the sketti with the orange and the texture by fringing the title block...I think it looks like strings of sketti. 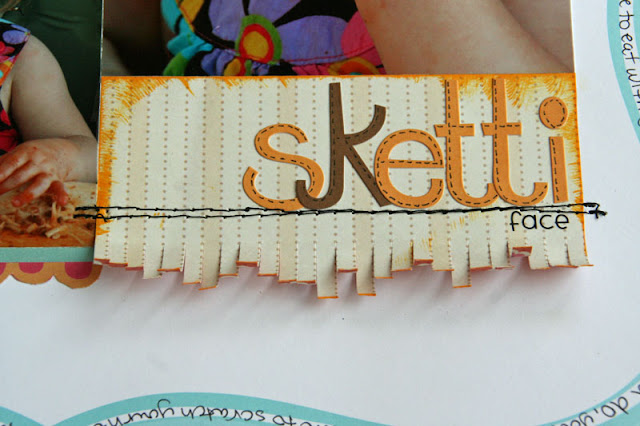 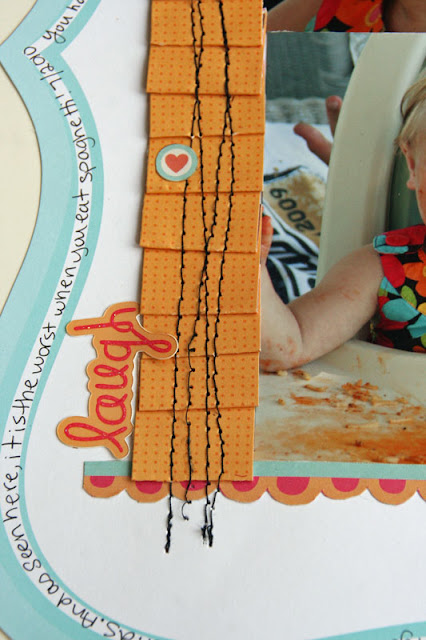 Last, but not least, is my THIRD LO for the Treasured Hunt.  I am so so so nervous about this one. 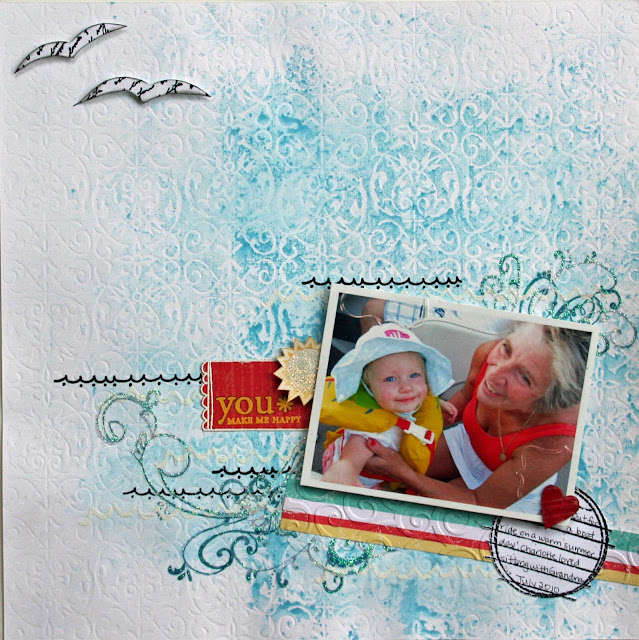 I wanted to choose a technique that I didn't think anyone else would choose, and one that I love, but haven't used in a while, so I chose embossing!

I did both dry embossing and heat embossing on this page.

For the embossed cardstock background, I sprayed some glimmer mist on a brayer and ran it over the negative side of the cardstock so that the pattern would show through in white.

The birds, the swirls, the black and white waves, the title, and the journaling block are all heat embossed with different colored powders. For my bling, I went over some of the embossed flourishes with Stickles. 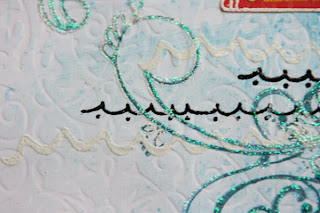 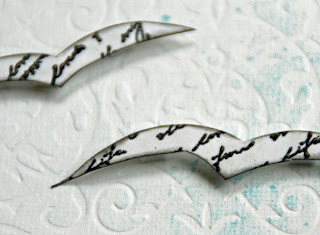 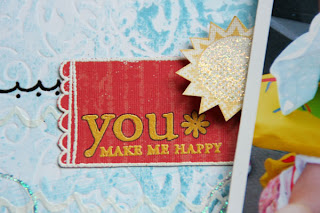 I did some dry embossing with plates right on the photo itself!!!
I also embossed the strip of patterned paper, and the little heart. For the heart, I cut out some chipboard and painted it, then put glossy accents on it. When the glossy accents dried, I ran it through an embossing plate. 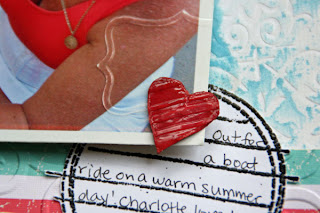 The photo in this LO itself is a bit blurry, but I loved it so much....it is my mom and my daughter, and I just love both of their expressions. I wanted the photo and the technique to be the "stars" of this LO, so that is why there is a lot of white space.

Beautiful LO's!! I love every little detail of all of them:) The horticulturalist LO is super cute and you know how I feel about that spaghetti LO...ADORABLE!! Great LO's Audrey!

LOVING these layouts! the layering details are FANTASTIC!

WOW! Such beautiful layouts! I love your blog header too!

Your layouts are gorgeous!! I love the one for the Treasured Hunt! Good luck :)

Love all of these LOs Audrey - especially the dry embossing one...Just FAB (and the spagetti photos are just too stinkin cute!)